The Friends of Lewes has been a major participant in many campaigns and restorations since its foundation in 1952, which have resulted in today’s pleasing built environment. It continues to argue for good design in new developments in Lewes.

Past Friends of Lewes projects include:

The Old Candle and Needle Factory 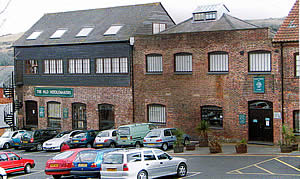 This building was rescued from demolition and is now a successful complex of specialist craft studios, offices and shops known as the Needlemakers. 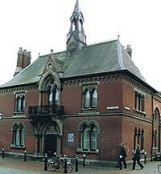 We encouraged proposals that resulted in these buildings being saved from threatened demolition. 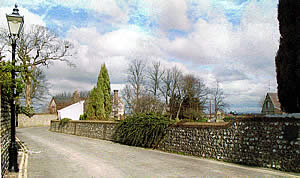 We worked with the Town Council on rebuilding the wall of the mediaeval Tilting Green and restoring the Pinwell Fountain and the sign of the White Lion in Westgate Street.  The original White Lion is now displayed in the Town Hall.

We raised funds and managed the repair of the northeast gateway into Grange Gardens in Southover and the fence alongside Southover Road in 1993.  More recently, we worked with the District Council to influence the selection of suitable railings erected along the channel of the Winterbourne stream on health and safety grounds.  In the Knot Garden, now repairs to the paths are completed, a jointly-funded floral centrepiece to replace the now-defunct fountain is planned.

We worked with the District Council to initiate and part-fund the replacement of the granite bollard, missing for many years, and the cleaning of the stonework of the Victorian Water trough at the bottom of Watergate Lane.

We influenced new or recent developments in the town, including: 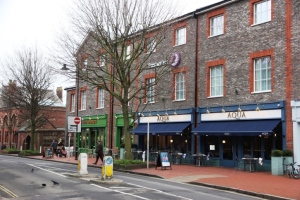 This three storey building, comprising a Premier Inn hotel with retail units on the ground floor, was completed in August 2016 and replaced the former Magistrates’ Court.  The Friends of Lewes were influential in changing the design to make it more sympathetic to the area of town in which it is located. 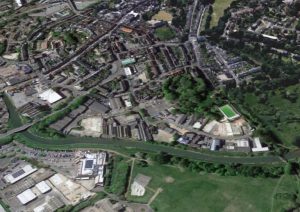 This large 15 acre urban regeneration project on the banks of the river Ouse was approved by the South Downs National Park Authority in December 2015 and subsequently granted full planning permission in April 2019. The plan was for mixed use, including 416 housing units (40% affordable), several retail units, a riverside walk with a footbridge across the river, a large car park and a medical centre. Flood defences were to be provided. However in April 2021, the eco-developer Human Nature acquired the part of the site owned by MAS REI, and aims to submit a different scheme for planning permission in the early part of 2022.
For some time, the Friends of Lewes has liaised with the developers, and chaired the Sounding Board considering design matters.

This building which has some Arts & Crafts features was a church hall before it was bought for development and became disused.  It is in the Conservation Area and is in a key “gateway” position on the main road west out of the town.

In 2008 and 2009, we opposed applications to demolish and develop it for housing which were refused.  In April, 2014 an application for conversion to four town houses, with little external change, was approved. Work began in April, 2017 and was finally completed in 2018.

This derelict land to the south of Spences Lane was subject to a failed 2012 planning application for a development of 53 residential units and 2,650 sq m of commercial space. The Friends of Lewes objected to the application on grounds including its inappropriate massing, unsympathetic use of materials and lack of connection with its surroundings.

In 2015, the developer submitted a revised application for more housing and less commercial space, to an improved design, and this was approved in 2016.  However the revised plan threatened the adjacent line of poplar and lime trees along Blakes Walk, which became the subject of a local campaign. The developer agreed to a revised plan that preserves and maintains the trees in the walk. By the beginning of 2018, permission had been granted for 101 dwellings, and work started in late 2019.

We are monitoring these upcoming developments:

This redundant school site could be used for social housing.  We consider it important to retain the existing trees as they provide a good landscape feature which, among other things, partially hides the ugly County Hall office blocks from some viewpoints.  Any significant development should only be permitted if access to it is from St Anne’ Crescent.

This greenfield site with historic links to the former religious settlement in the vicinity of Malling Deanery was put forward by the Inspector considering the South Downs Local Plan as a potential site for housing.

Although the Friends of Lewes objected strongly to the potential zoning of this site and the National Park Authority were concerned about the impact on the landscape, the Inspector confirmed his decision.  We will comment on the design and potential screening of a development when draft plans for the site come forward.

Follow our progress on these issues in the latest Friends of Lewes Newsletters.