On Sunday 24th November 2019 the Trees Committee of Friends of Lewes, and friends and family, were able to celebrate National Trees Week by planting seven more street trees in Lewes.

We began in Prince Edwards Road where we planted a white Hawthorn, (Crataegus monogyna), a Hornbeam, (Carpinus betulus), and a Wild Cherry, (Prunus avium). This project was in response to a request from three of the residents, who have each “adopted” a tree to help to look after them.

After watering the trees in, we moved on to the green in Cross Way, on the Nevill. There we planted four more trees, two at each end of the green, to allow plenty of room for play space between them. The trees chosen, following consultations with nearby residents, were: a Wild Cherry, (Prunus avium), a Hornbeam, (Carpinus betulus), a Rowan, (Sorbus aucuparia), and an Ornamental Pear, (Pyrus calleryana “Chanticleer”).

Nevill Residents’ Association not only asked for some trees here, but they also donated £300 to us so that we might be able to plant some more around Nevill in the future.

Members of Friends of Lewes Trees Committee have regularly been involved in tree events at Vert Woods Community Woodland, near Laughton. We are very grateful to VWCW for giving a home to our nine Elm Whips, (a whip being a small sapling about 75 cm in height). In 2014, the Conservation Trust gave these to us, after they were taken from cuttings from surviving trees in Hove. After almost five years growing them on from 4” pots to 11” ones, it was clearly going to be some time before they would grow large and robust enough to be suitable for planting as street trees for Lewes. Vert Woods let us plant them in a protected space on either side of what will become an avenue of Elms. Three of the trees were planted on New Year’s Day 2019, and the rest were planted in April 2019.

This adds to the growing collection of Elms at Vert Woods, many of which were planted as part of the “Bring Elms back to the South Downs” project. We hope that they will encourage the White-letter Hairstreak butterfly, which breeds on Elm species, especially on the edges of woodland rides. The numbers of these butterflies declined in the 1970s when its food source was reduced by the effects of Dutch Elm Disease.

The Friends of Lewes’s “Lewes Street Elms” project aims to restore the avenue of Elm trees on St Anne’s Hill, Western Road, and at the same time to create a beautiful, green and healthy gateway to Lewes High Street.

Three Elms were planted in 2017 and 2018, and in January 2019, a fourth Elm tree was added to the row, funded by Friends of Lewes, Tesco “Bags of Help” and private donations.

Unfortunately we have not been able to complete the original avenue of seven trees due to the presence of street furniture and underground utilities.

The row of four Elms on St Anne’s Hill

Lewes Urban Arboretum, Trees Committee of Friends of Lewes planted four more trees on 18 November 2018. At the request of residents living nearby, a Ginkgo biloba, (Maidenhair Tree), Sorbus aria Magnifica, (Whitebeam) and an Acer campestre Louisa Red Shine, (Field Maple with especially red leaves in Autumn), were planted outside Mount Harry Stores. Another Liquidambar styraciflua Worplesdon, (Sweet Gum), was planted in Houndean Rise to add to the twelve which we planted there in March 2018: as a project in consultation with residents to replace trees which have been lost over the years. The residents have taken very good care of the trees by watering them regularly over the dry summer which we have just had.

The Friends of Lewes’s “Lewes Street Elms” project aims to restore the avenue of Elm trees on St Anne’s Hill, Western Road, and at the same time to create a beautiful, green and healthy gateway to Lewes High Street.

These elms will improve the health and biodiversity of the environment for birds, bees and humans, by reducing pollution, producing oxygen, and helping to avoid water run-off.

The original seven Elms, dating from about 1900, have now all been felled because they had Dutch Elm Disease.

Elms on St Anne’s Hill, Lewes in about 1910 and 1916
Postcards courtesy of Mick Symes and the Lewes Past Facebook Group

The photo on the left, below, shows one of the two new DED-resistant Elms already planted on this site in March 2017, thanks to the support of East Sussex County Council, Lewes Town Council and a generous donation from a member of the public.

On 15 March 2018, the ESCC arranged for another new Elm tree to be planted at St Anne’s Hill – photo above, right. The Friends of Lewes and The Chalk Cliff Trust contributed to the funding for this.

Tesco has already granted a further £1,000, and this sum could be increased by the supermarket’s  blue tokens voting scheme during March and April 2018.

March 2018 – Houndean Rise
On Sunday 11th March the Trees Committee of Friends of Lewes, helped by some of the residents, planted twelve trees in Houndean Rise.

In recent years many trees had to be felled and have not been replaced. We chose the trees, in consultation with the residents, for a mix of Spring and Autumn colour. They also had to be varieties which would prove resilient on such narrow, chalky verges. It had been quite difficult to find individual sites for each of the trees, because of the complex network of underground utilities shown to be under the street, but we managed to find a place outside each of the homes where a resident had agreed to look after one or more trees and water them. 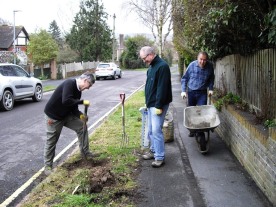 March 2017 – Abergavenny Road revisited
On Sunday 19th March the Trees Committee of Friends of Lewes revisited Abergavenny Road to plant a further nine trees on the grassy area at the top of the bank. The trees are all native trees which are good for wildlife: Alder, (Alnus glutinosa), Himalayan Birch, (Betula utilis Jacquemontii), Wild Cherry, (Prunus avium), and Field maple, (Acer Campestre).

December 2016 – Middle Way, Valence Road, Abergavenny Road, South Downs Road
Following requests from, and consultations with, the local residents, the Trees Committee of Friends of Lewes applied for planting licences for replacement trees in Middle Way, Valence Road and Abergavenny Road. We worked with LDC and ESCC to secure the extensive utilities surveys necessary before planting permission was granted.

In December 2016, the Trees Committee planted the nine new street trees around Lewes, aiming towards our vision of Lewes as a “town in the trees” or an urban arboretum.

At the junction between South Way and Middle Way there is a grassy plot where two plaques record that trees were planted there to commemorate the Silver Jubilee of King George V in 1935. Of the three trees growing there in recent years, one had been removed and one was very dead and we were asked by residents to replace them. We have planted: a fruiting cherry, (Stella on Colt rootstock); a Whitebeam, (Sorbus aria Magnifica), and a red Crab Apple, (Malus Rudolph).

In the cul-de-sac at the bottom of Valence Road, two Robinia trees had been badly damaged and we were advised that these trees were not vey hardy in our chalky conditions. At the request of residents, we have planted two specimen Liquidambar styraciflua Worplesdon, (Sweetgum), trees, one on each side of the road. These trees have lovely rich red leaves in the Autumn.

In Abergavenny Road, opposite the gardens of St Pancras School, there used to be two Rowan trees with pink-white berries, (Sorbus Hupehensis), which were special to the neighbourhood because they had attracted a flock of Waxwings during the last cold winter. One of these trees was cut down in the summer and, having been advised that these Sorbus do not seem to have a long life on chalk, we planted three new Whitebeam, (Sorbus aria Majestica), near to the one remaining tree. Our hope is that the bright red berries of the Whitebeam will attract the Waxwings on their next visit to Lewes.

Finally, we revisited South Downs Road, where we had planted four trees in March 2015, to plant a Grey Alder, (Alnus incana), in the space which had used to be occupied by a burger van. This makes a fine row of five trees which meets our aim to increase the number of trees and improve the environment in this area of the town.

March 2015 – Malling Industrial estate
We planted four trees: a Norway Maple, (Acer Platanoides); a Wild Cherry, (Prunus avium); a Swedish Whitebeam, (Sorbus intermedia), and a Hybrid Elm, (Ulmus Americana Princeton) on South Downs Road. This planting will mature to soften views from the surrounding Downs – and we hope to extend it further along this industrial site in the future.

March 2015 – Southover School
We also planted a new Oriental Plane tree, (Platanus orientalis Digitata), in the grounds of Southover School to replace a nearby tree which had been felled because of disease.

2015 – Lewes street tree survey
Nick Jones, a member of our Trees Committee, has carried out a survey of Lewes street trees to identify where former avenues of trees appear to be at risk, for example, through old age, disease or felling of trees without replacements. We have put together a long-term plan to fill these gaps in street planting and hope to begin with this work in Winter 2016/17 in the De Warrenne Road area.