A Neighbourhood Plan (sometimes called a Neighbourhood Development Plan) is a way of helping local communities to influence the planning of the area in which they live and work.

The Lewes Plan has been in development since 2014 and is nearing its completion.

The government-appointed Independent Examiner issued his final report on the proposed Lewes Neighbourhood Plan in December 2018. The report proposes some minor changes, but is overall very positive and supportive.

This final version of the plan will then proceed to a public town referendum, currently scheduled for 7 March 2019, for endorsement, after which (assuming the referendum result is in favour) the plan would come into effect, once formally adopted by the SDNPA. 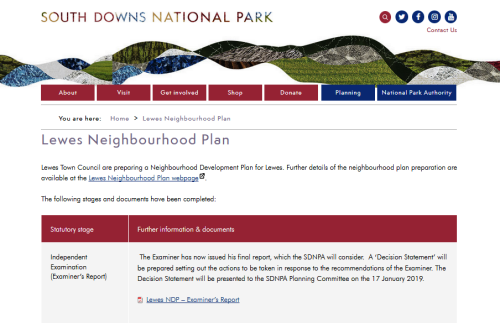